I keep an internet search for items related to DragonQuest running across several sites: ABEBooks, eBay, etc. Over the years, I’ve picked up several copies of the 2nd and 3rd Edition rulesets, to share with our gaming group, as the expense isn’t all that much more than new copies of the current Dungeons and Dragons 5th editions books, in fact, many times, it’s been less expensive.

While most of my hits from eBay are not actually relevant (the video games for the Dragon Quest (formally published as Dragon Warrior in North America until 2005) series, or Anne McCaffery’s Dragon Riders of Pern books, every great once in a while, someone will let go of what I’m actually looking for. I’ve found copies of Ares Magazine (usually wanting way too much for them, and I have digital copies of almost all of them by now), and the afore-mentioned 2nd and 3rd edition ruleset. 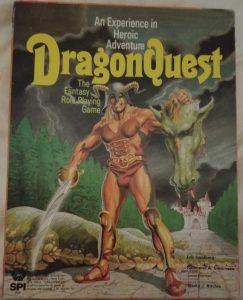 But earlier this month – a huge surprise: a boxed set of the first edition, listed as “uncut”. I hit that “buy now ” button and waited. The package arrived yesterday (I wasn’t actually expecting it that soon, either due to the whole COVID-19 thing, so 5 stars to the seller for promptness for that alone!)

This site uses Akismet to reduce spam. Learn how your comment data is processed.